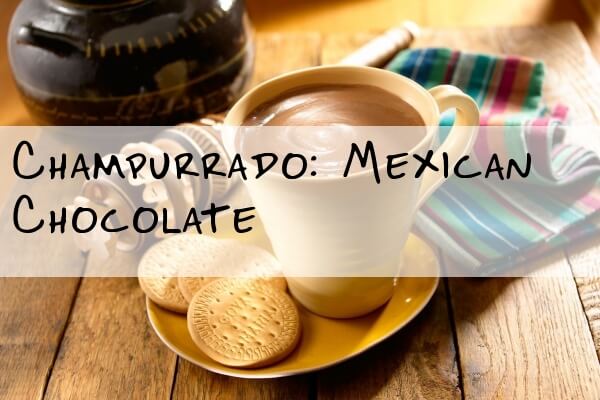 Champurrado is a chocolate-based atole, a warm and thick Mexican drink prepared with masa de maíz, masa harina or cornmeal; Piloncillo; milk or water; and it can occasionally contain cinnamon, aniseed or vanilla as well. When people talk about ”champurrado” or ”çhocolate atole”, you now know that they are talking about the same drink.

It usually accompanies delicious tamales. It’s very popular to drink champurrado on special holidays such as Day of the Dead or Las Posadas, which is the Christmas holiday season. It’s a very popular Mexican chocolate during the colder months of the year.

The Aztec Culture and Chocolate

Chocolate has been a big part of Mexican culture. It all started during the time of the Aztecs, when chocolate was prepared as a drink with corn masa and some spices. Through their rich history of chocolate, there have been many artifacts that have been used to harvest, cultivate, process and consume cacao.

One of these old artifacts is called the molinillo. It’s a very interesting kitchen gadget due to its complexity. The molinillo is a wooden kitchen utensil that is used extensively in Mexico, but also other parts of Latin America, such as Colombia. It was used to make hot chocolate for champurrado drinks. Some molinillos are beautifully ornamented. It uses a mix of different colors and carvings that are characteristic of Mexican culture.

This is a relevant tool in the history of chocolate because it represents Mexican culture in an accurate way. Before the Spanish arrival to the Americas, cacao was consumed by the Aztecs and Mayans in cold drinks that were unsweetened. Instead of using cinnamon or sugar, the indigenous peoples of the Americas prepared cacao beverages and mixed them with chiles, corn, and vanilla.  After the Spaniards discovered cacao, they took it back to Europe with them. Cacao made a transition from a spicy and cold drink to hot and sweet.

How to make Champurrado

Here’s a video posted by YouTube Channel ”Simply Mamá Cooks” that explains perfectly how to make champurrado yourself at home.